The Photographic Resource Center displays some of its resources 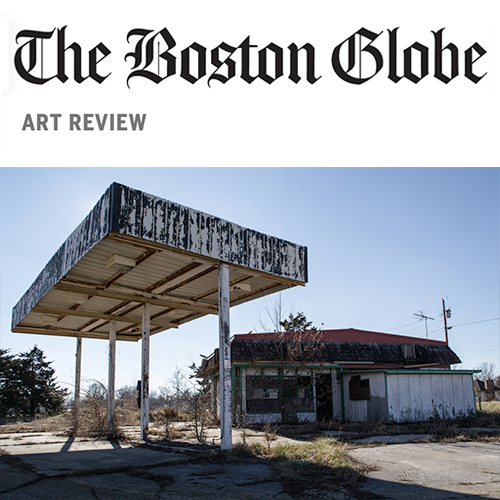 “When Time Matters” is the title of one of three Photographic Resource Center shows currently hanging. It’s at fp3 Gallery, in Fort Point, through June 29. “From the Vault: A Show and Sale of PRC Treasures” is at Bridge Gallery, in Cambridge, through April 30. “2022 PRC Student Exhibition” is at Panopticon Gallery, in Kenmore Square, through April 29.

“What Time Matters” has been curated by Jessica Burko and Susan Nalband. The work of all four photographers in the show relates, they write, to “time as it passes and stands still, how we use our time and what it represents.”

Steven Duede has been photographing abandoned service stations along Interstate 70, between St. Louis and Kansas City, Mo. The passage of time here is over a longish duration and starkly shown. The starkness is underscored by the four color photographs being unmatted and having black frames. The sky becomes a kind of frame for the buildings. A couple of them, with pumps and outbuildings removed, look almost like pavilions — celebratory structures — until examined more closely. There’s a further durational twist. With their lack of ornament and flat roofs, the buildings are products of the modern movement. How strange, then, to think of something consciously modern as now wholly obsolete.

Faith Ninivaggi also uses the sky as a framing device in the most striking of her five photographs in the show. It’s called the “The Quarries,” and shows three young men by the Quincy quarries. It has a sense of mystery, which befits Ninivaggi’s concern in each of the photographs, the perplexities of Gen Z as its members endure such a strange and troubling time. “The mother in me grew increasingly concerned for this younger generation,” she writes, “the photojournalist increasingly curious.”

Eric Nichols’s four black-and-white photographs are close to home, literally. They show him and his wife, Brittany, in their backyard and in their house during the early months of the pandemic. Domestic confinement finds itself mirrored by confinement within the frame. The events recorded by Nichols (what a stare he has!) are quite mundane: a haircut, the couple sharing coffee, handwashing, standing in a doorway. Yet seeing them in the context of 2020 they take on an unsettling gravity.

Suzanne Révy’s four color triptychs are far removed from highways and teens and domesticity. They record landscapes in and around Concord, with no human handiwork to be seen. The passing of time here is seasonal. The interplay of each image in the triptychs chimes with the further interplay within each photograph of space and openness with the tangibility of trunk and branch.

“When Times Passes” has an additional purpose. All four photographers are PRC volunteers, and the show honors their contributions. A different kind of contribution is hoped for with “From the Vault.” The 29 photographs come from the PRC’s holdings, with their sale serving as a fund-raiser.

Prospective purchasers won’t be reaching for their checkbooks out of just public-spiritedness. There are some bargains here, with fine photographs from some very well-known artists — among them, Harold Edgerton, Carl Chiarenza, Emmet Gowin, Patti Smith (yes, the singer, and she’s a talented photographer).

Bridge Gallery’s proprietor, Greig Cranna, curated the show. He sets up numerous visual conversations. A Gowin landscape next to one by Neal Rantoul. A Chiarenza abstraction next to landscapes by Bradford Washburn and Vittorio Sella, in both of which nature is so overwhelming the images verge on abstraction. Note the stunning paltriness of the two canoeists in the Washburn.

Nothing in the show can quite match the power of the photograph from Susan Meiselas’s “Carnival Strippers” series. If that look on the child’s face doesn’t break your heart at least a little bit, you might want to consider consulting your cardiologist. The expressions on the faces of the men in the audience are heartbreaking in a very different way.

To end on a happier note, there’s Jim Stone’s “Les working on his 1985 Cadillac, New Westminster, British Columbia.” In addition to being a very good photographer, Stone served for many years on the PRC board and is a past president. It’s a wonderfully active image, so much so that it’s easy perhaps to overlook the structure in the background. What better place for a photograph that includes such a mighty suspension span than, yes, Bridge Gallery.