In the 1970s, there was a remarkable excitement about photography in Boston and elsewhere. Popular magazines like Life and Look promoted photography and created a strong interest in the general public to view photos for news, human interest, entertainment, examples of fine art, etc. Importantly, the SLR was now affordable and easily available. Plus, the baby boomers were in their 20s and 30s, college educated, and looking for a way to express themselves. They believed that much change was needed in society, in government institutions, and in our personal lives. Does that sound familiar? That perceived need for change encouraged people to form organizations, sometimes small but very influential.  Two such organizations really inspired me as a photographer and helped to start my career. One was the Cambridge Photo Coop, where I had a chance to hang out with other photographers as peers. The second organization was the PRC, where I had a chance to meet established photographers, see examples of their work, and listen to them talk about their work, their approaches, what they were trying to accomplish. 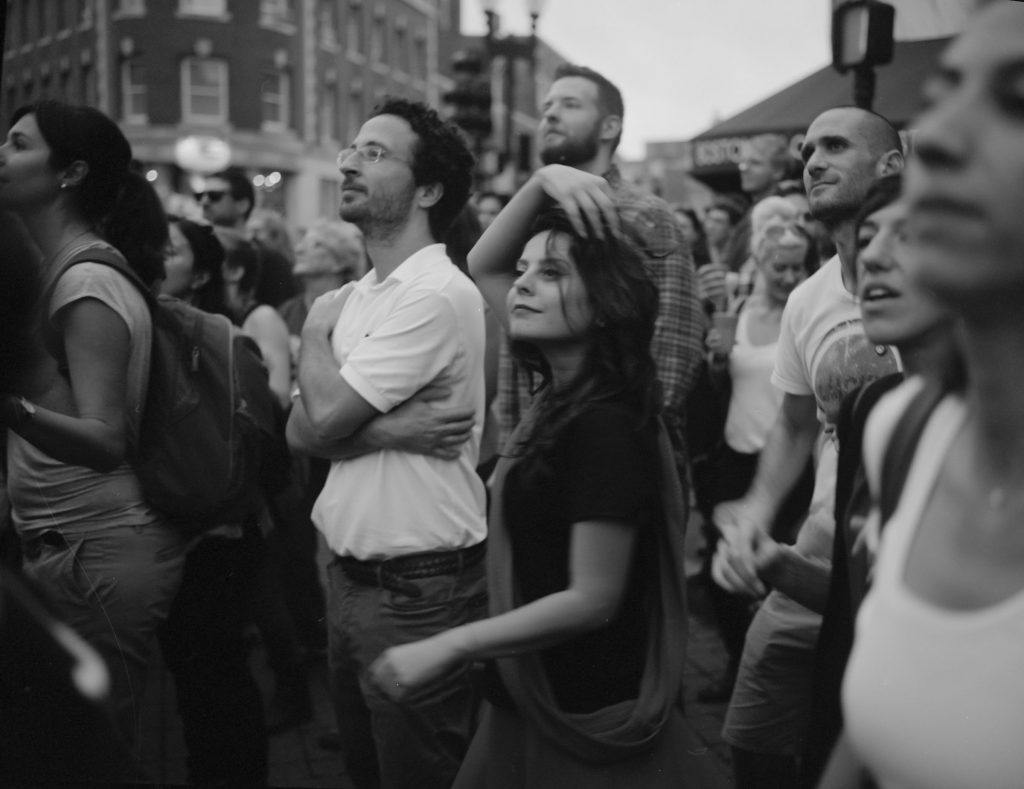 The PRC began in 1975 primarily through the efforts of Chris Enos, the PRC’s first executive director and Carl Chiarenza, a founding board member. Local institutions like Polaroid and the Fogg Museum contributed small amounts of money but enough for a phone line, an important step forward. Significantly, the PRC published a monthly newsletter with a calendar that filled a need for information about local photo exhibits and events.

Other important early contributions came from Stan Trecker, the first director after Chris Enos, who was responsible for increasing membership and putting the PRC on a better financial footing. Then John Parker directed a successful campaign to raise money and create an office and exhibit space at BU. The PRC exhibit space and BU’s Morse Auditorium were the sites of many exciting photo exhibits and presentations by photographers who had national and even international influence, such as Ansel Adams, Walker Evans, Bernice Abbott, Gordon Parks, Susan Meiselas, Gordon Parks, Cindy Sherman, Lee Friedlander, Robert Mapplethorpe, and Nan Goldin.

In addition to exhibits and lectures, the PRC also presented a series of workshops. I remember taking weekend workshops in the 1980s with Ralph Gibson and Duane Michals.  Gibson, Michals, Friedlander, and Jerry Uelsmann were photographers who offered a different kind of subject matter, one that was more personal or psychological in perspective. Photographers who came before them, like Robert Frank with his seminal book, The Americans, and Diane Arbus with photos of people at the margins of society, were forerunners of that movement.

The emphasis in photography had shifted from aesthetic, informative statements using the external world to a more self-referential point of view.  That shift and the women’s movement created a bridge to photographers like Cindy Sherman, Judy Dater, Nan Goldin, Lauren Greenberg, photographers whom the PRC exhibited and presented through lectures and workshops. Both Sherman and Dater were game changers with their self-portraits that showed themselves in various traditional female roles. Their work spoke to many women and the societal limitations or expectations they experienced.

For decades, the PRC has simultaneously shown both traditional photography and work that represents cultural and artistic shifts: the landscapes of Ansel Adams and Aaron Siskind; Garry Winogrand’s exciting street photography; the photo-journalism of Susan Meiselas and Eugene Richards; portraits of prisoners on death row by Lou Jones; the provocative work of Robert Mappelthorpe and Nan Goldin, who is best known for The Ballad of Sexual Dependency, a personal, self revealing photo and verbal essay.The PRC reinforces how elastic the photographic world is, how photography can encompass such a wide variety of subject matter, perspectives, and approaches.

Just a few years ago, BU reclaimed the PRC space. Through the efforts of John Bunzick, the current PRC president, Bruce Myren, and Richard Zauft, the Lesley Art and Design dean at the time, the PRC moved from BU to its present location at Lesley’ Lunder Art Center in Porter Square, Cambridge.

Now, in the time of the pandemic, which sounds ominously like a Gabriel Garcia Marquez novel, we are currently operating as an online organization, delivering exhibits, lectures, workshops, and an electronic rather than hard-copy newsletter.  Despite the change in the delivery process, the PRC still offers a wide range of events and exhibits: photography that examines contemporary issues, such as the construction of gender identity; contemporary approaches, such as concept photography; lectures by established photographers such as Arno Minkkinen, who uses his body and the landscape to create startling, visual statements; and the role of women in photography today with a screening and panel discussion of RISK, a film by Andrea Pritchard that chronicles the work of female photo journalists Carol Guzy, Yunghi Kim, and Alexandra Avakian.

Since its beginning, the PRC has promoted both established photographers and innovative trends. It has helped photographers navigate the ever changing landscape of photography and find a place in it to enjoy, create, and even make a living.

Fittingly, the PRC is still an elastic organization for an extremely elastic medium.

~ The history of the PRC compiled by John Heymann.