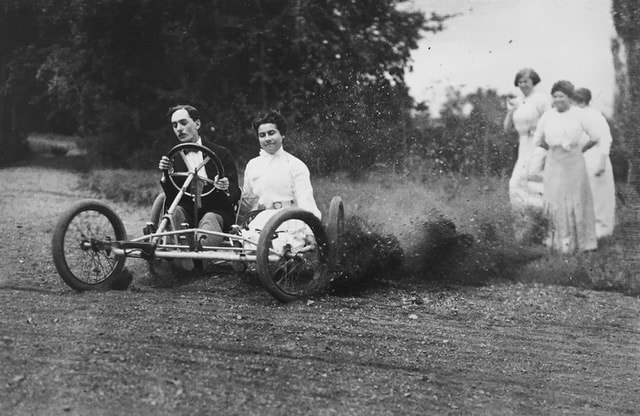 I studied photography under Charles Meyer at Boston College, who presented a lot of work to us in our 1983 Photo 1 class.

Since that introduction, I’ve especially enjoyed many of the early French photographers, including Eugene Atget, Henri Cartier-Bresson, and Jacques Henri Lartigue. I appreciated all of these masters and how they documented life.

I enjoy Lartigue’s work with stereo and panoramic images, and for many years, and through various apartments, I had three panoramic postcards by him hanging over my desk. I responded to that panoramic format and tried to replicate it early on in my own work.

Lartigue grew up in a wealthy family in France and started working with a camera when he was seven. He documented his family’s life and as he developed his own style, he would poke fun at his own “leisure class.”

Lartigue seemed to have his own whimsical response to the more traditional photographers of his time. His photographs were less formal and showed people in amusing situations. He is quoted as saying, “Photography to me is catching a moment, which is passing, and which is true.”

I recently watched the Wes Anderson film, The Life Aquatic with Steve Zissou, and learned that Lartigue influenced this film and his name appears in the credits. Anderson also wrote that the photographer inspired the making of Rushmore.