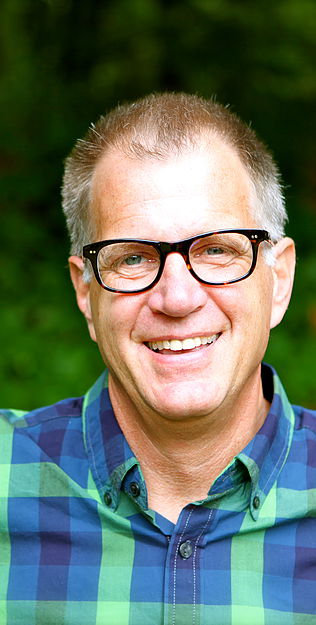 Conrad and his wife had some misgivings when her 90-year-old mother announced that she wanted to take a solo trip to Cuba. She’d been there once before, prior to the 1959 revolution, and wanted to see it again.

Though she has a long history of traveling solo, they thought she probably shouldn’t venture to Cuba, especially alone.

“I went upstairs and left it to them to sort out. By the time I came back down, they’d decided I would accompany my mother-in-law,” he laughs. “I would take the pictures and she would translate, as I have very little Spanish.”

Little did he know, that decision would open an entirely new creative burst for him. 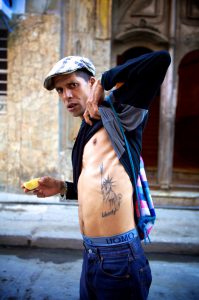 “Eduardo: Mire” from Person to Person: Snap Encounters on the Streets of Havana. © Conrad Gees

“I ended up going and I fell in love with the place. We had traveled independently, and when she got delayed, I was on my own. I spent the better part of three days just wandering the streets of Habana Vieja and Habana Centro. The people I met amazed me, and what was happening on the streets just completely captured me.

“Some of it was what I expected, but so much of it was not; the openness of the people, the sense of community that I witnessed, how people worked and went about their lives…I was in awe.”

He’s been back twice more since that first trip, observing life on the streets and attempting to document the changes that are occurring as relations with the US evolve. 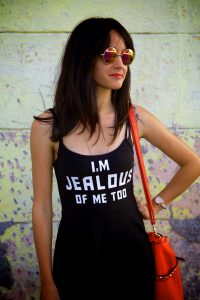 “Jealous” from Person to Person: Snap Encounters on the Streets of Havana. © Conrad Gees

The results so far are a collection of widely varied, evocative images from off the beaten tourist paths, and a connection to the people of the island. In one group of images, Person to Person: Snap Encounters on the Streets of Havana, Conrad has pulled together portraits of people he met and their stories.

A second Cuba portfolio overlaps with another of Conrad’s loves: trees and forests. After wandering the streets over the course of six days, he needed a break. So he rented a bike and went to explore a forest he’d seen during a bus ride. Those images compose his Bosque Magico de la Habana Portfolio.

“I discovered all these old wrought iron benches, food pavilions, gazebos and promenades that had fallen apart along the river and were completely overgrown. You could tell that at one time, this was beautifully landscaped, but now, the overgrowth and the vines on the trees just spoke to me. I spent four hours there, in a place that’s maybe a mile long.”

He sees the new growth over the old as a metaphor for the Cuba he’s come to know. 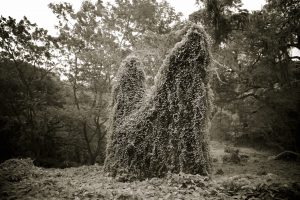 “I have traveled a lot, but what captivated me is that truly, Cuba is unlike any country I’ve ever been to before. When you look at Cuba, people say it’s frozen in time. It’s not. People living there have created this whole interesting society. Their homes, the means by which they get food, electricity and water, left me, an American with many privileges in life, awed and humbled by their resilience and ingenuity.”

A passionate amateur who has been taking pictures since the age of ten. I am fortunate enough to be at a stage in my life where I can devote significant time to the pursuit of this passion.

I look at the world around me and try to capture those moments when the visual world leads to an image that speaks to more than the subject at hand, much as a poem can convey meaning far beyond a literal interpretation: When looking becomes seeing. 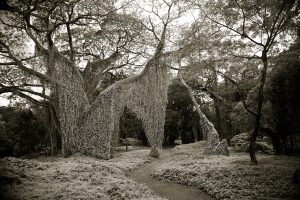 There are so many photographers I admire, but the images and photographers who have influenced my thinking the most would be the landscapes of Harry Callahan, Robert Adams, and Art Sinsabaugh; the documentary work of Bruce Davidson, especially his works East 100th Street and Central Park; and the work of Hiroshi Sugimoto and Josef Sudek. I also greatly admire Janelle Lynch, Richard Misrach and Rania Matar.

I would have to say that my muse is photography itself.  A strong photograph and the act of taking pictures elicit the same feelings in me that musicians talk about when they play a beautiful musical phrase or hit the perfect note.

Be it using the camera to capture the deep beauty of the natural world or record life on the streets, I find deep pleasure in recording moments of beauty and insight, and then producing an image that at least is a keepsake, and at best allows me to share the experience with others.

I got my first camera, a Kodak Brownie Fiesta, when I was ten and loved taking pictures with it, but my passion for the camera was ignited when I was fifteen. I went to the Museum of Modern Art in NY and wandered into the photography section. I fell in love with what I saw and the feelings photographs could evoke. That was when I began to think of photography as an expressive medium.

Immerse yourself in the medium. Focus on the image and not the equipment or the technical aspects of photography. Those should only come into play to help you create images that express the deeper meaning of your vision. Learn to see, not just look. 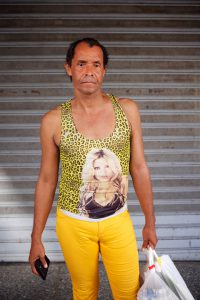 “Man Running Errands” from Person to Person: Snap Encounters on the Streets of Havana. © Conrad Gees

Where has your work been exhibited?

My work has also been published in Don’t Take Pictures and the University of Massachusetts Amherst’s Fine Arts Magazine.

Most recently I completed the Photography Atelier Program at the Griffin Museum of Photography under the tutelage of Meg Birnbaum and Amy Rindskopf and had my Bosque Magico de la Habana Portfolio accepted as one of the top 200 finalists for Photo Lucida’s Critical Mass 2017.

How long have you been a member of the PRC and what was your motivation for joining?

I was a member for four years in the early ’80s, and returned in 2013. My motivation then and as now was to make connections with others passionate about photography. The support I gain from attending Nights at the PRC, and going to exhibits and lectures organized by the PRC has been invaluable in my journey as a photographer. If you are in any way looking to further expand the expressive and artistic nature of photography then the PRC is the place for you.